A grand stone stairwell leads up past deer hide covered doors into the Great Hall, a rectangular room which is decorated in the Regency Period yet posseses much older features. The fireplace, which includes a painted mantel stone dating from 1550 and the fire basket, which dates from before 1740, are still in use today. 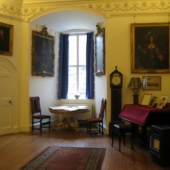 Leading off the Great Hall is an 18th century wood panelled dining room containing early sash windows, with fine views to the south and east. It contains a hidden stair that reputably descends to below the front lawn which provided an escape from the tower in more troubled times. Careful counting of the smaller windows shows that there are more than can be attributed to the rooms!

Close to the Great Hall is the Billiard Room, an Edwardian fantasy containing a full sized table with its original green baize and cues.

On the ground floor the front door leads to a passage, with servant’s bells and speaking tubes, off which is a dungeon. Near the exit door to the east is a fine old vaulted kitchen, complete with a kitchen range and other artefacts plus some graffiti dating from 1580.

Above the first floor lies three further stories, all empty as they suffered extensive water damage before the roof was replaced in 1991. It is hoped that these will eventually be re-instated to create a letting apartment.