The Tutor of Kintail, Sir Rorie Mackenzie was given ‘Patent of Fire and Sword’ by King James 6th of Scotland to subdue the West Highlands and in particular the Island of Lewis’, home to the McLeods of Lewis and a thorn in the side of the King. This Sir Rorie achieved with such efficiency that certain legends grew up about him such as ‘There are only two things worse than the Tutor of Kintail, frost in spring and mist in the dog-days’. Another true story concerns his journeying south to the Perth markets. Whilst riding alone he was stopped near Blair Castle by the Duke of Atholl’s men. They asked him what he was doing and where he was going. He said nothing but simply dismounted, took out his sword and began to sharpen it on a nearby stone. Asked what he was doing he simply said ‘I am about to make a road between your masters head and his shoulders’. Seeing that he was finely dressed and obviously someone of rank, the men retired to seek advice from the Duke who replied, ‘It can only be two people, it is either the Devil or The Tutor of Kintail, let him pass safely!’ He was then given an escort to see him into Perth. His subsequent marriage to the heiress of Lewis, Dame Margaret McLeod, brought him and the Mackenzies, the west coast lands of Coigach. Their marriage stone still resides above the front door of the castle though sadly worn. 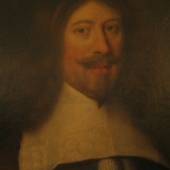